HOW TO CHOOSE A HIDDEN SPY CAMERA?

A spy camera that can be identified as a camera certainly doesn’t stand true to its name. The most essential feature of any spy camera should be the disguise – it should be so well concealed within an everyday object that it is almost unnoticeable & beyond limits of

Often the anomalies in the shape of everyday objects, the recording lights, etc. make it too obtrusive, and leave people suspicious about hidden camera, thus giving them enough warning to avoid undesirable actions in such areas. Avoid such cameras, rather look for more natural designs and more useful products which seem completely usual, and make it difficult to recognize a hidden camera.

Cables often make it a complex design, are more prone to damage, and thus pose a risk of failure to record important events. Moreover, a cable could make it easy to identify the concealed camera.

Wi-Fi dependent spy cameras have often been found to operate poorly due to weak wifi signals, and the fact that you don’t get wifi in areas that you want to monitor. Moreover, people do install apps, initially check the clips on their phone app in excitement, however, don’t like to be annoyed every now and then, and thus stop using it after a few days – so don’t bother about app based or WIFI cameras. A mini hidden camera with built-in slot for microSD on the other hand makes more sense. You can simply connect it to computer when you want to see the videos.

Given the development in technology, it is advisable to go for a camera that can sense motion, and starts recording only subsequently. You definitely don’t want to see unanimated videos of furniture or dead objects, rather only what transpires when people are in action. The less clips means, less time has to spent to find out the relevant portions of clips that you are interested in.

We have identified one such camera for you to save you hours of research, and to help you get the best value for your investment.

MEE007 by MY EAGLE EYES[GS1] is an incredibly designed mini hidden camera charger that can simultaneously work as a phone charger (android or iPhone) and as a spy camera. Moreover, its monolithic housing, no recording LED light, a hidden rear panel with micro SD card, full HD 1080p recording, wide field of view (90°), and cyclic recording function makes it an unbeatable choice for its price.

Buy wise, keep an eye even behind your back, and have a peace of mind always!

Now You Can Blog from Everywhere! 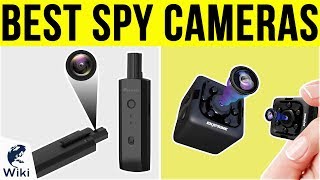 HOW TO CHOOSE A HIDDEN SPY CAMERA?

Follow
Be the first to know about our latest products.